Today is my 41st wedding anniversary. This is a long time. Some of you have not been alive as long as I have been married!

There are a couple of characteristics of a happy marriage, in my opinion. I do believe that you have to start with compatibility, but the main reason I feel that we have stayed married so long is that we don’t get too worked up about anything. Neither Ron nor I complain about the toilet seat’s position. We do not argue.

Our relationship got off to a fast start. I was in my first year at Dalhousie University and was on the varsity gymnastics team. My coach was not a fan of my current boyfriend and mentioned that she had been working with a guy that she thought would be perfect for me. When she told me who this guy was I remarked that he was a fossil. I was 19 and he was 33. A huge age difference at that time. My coach had also mentioned to Ron that she was coaching a student who was perfect for him. He pointed out that I was still a baby.

I was attending a gymnastics camp in the summer where Ron was one of the coaches. On Wednesday of the gym camp week there was a get together. With no small amount of curiosity Ron and I started talking. We talked all night, sitting outside of my dorm room at times watching a three legged beetle walk in circles. The camp ended on Friday and I went home and broke up with my boyfriend. Ron had a conversation with a woman he was living with and she moved out. We were married 8 months later.

Back in 1976 that was the order of events, we got married and then we lived together. Our first kid was not born until 1985. We have raised two children, have lived in five different houses in two provinces and have been together through the deaths of all of our parents and grandparents.

When people remark on how long I have been married I tell them that the key is to do what you are told and cater to his every whim. That is not the truth. The secret is to pick the right person and don’t sweat the small stuff — and it is all small stuff! 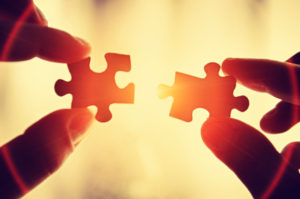 View all posts by Debi →
Victoria Day — Time Off With Pay?
Should You Offer Credit to Your Customers?